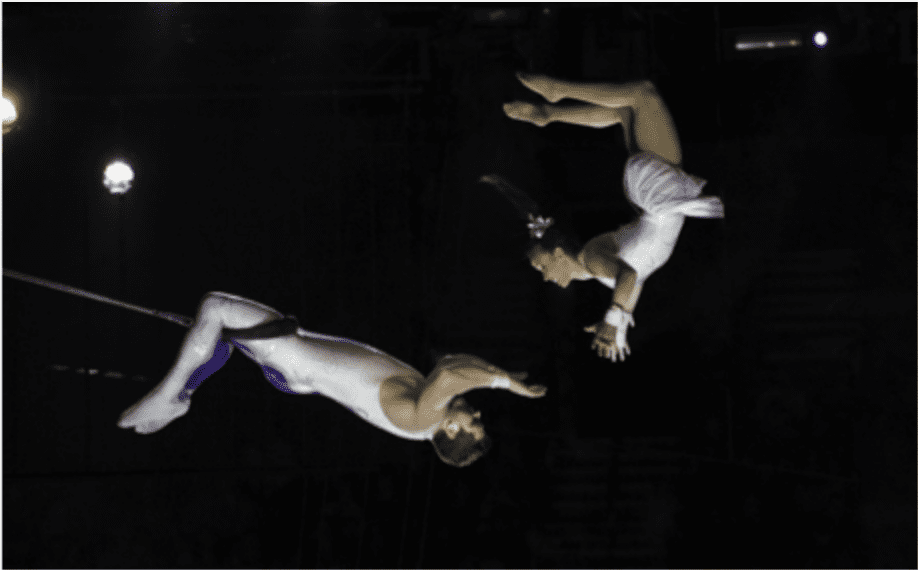 High above the crowd she swung on her trapeze. To and fro in a mesmerizing rhythm; descending and rising as she accepted then broke away from the pull of gravity. Back, then forth, from high to low and back to high. At the apex of her arc she hung weightless in the air, and for that moment there was no up, no down, no to, no fro.

Then back as her swing reversed and took her once again to an apex. Then down, her trajectory fueled by her muscular intentions set free. Set free to thrust her down as if to welcome and enhance the gravitational pull towards earth. Then up once again, higher and into a new space of weightlessness. There she released her grasp on the known. Her body floated motionless in anticipation of the other acrobat’s hands rising to meet hers. Motionless, in pause, where seemingly nothing was happening, but where everything in the universe was acting upon her to present her into a special space.

During a call the other day with my dear friends of Gender Equity and Reconciliation International, the term, liminal space, was eloquently spoken of and held up as a metaphor, that of being at the threshold of possibility.

There have been times recently when I have felt in betwixt and in between, not fully here, nor there; but then I realize I am not there at all. I am in the liminal space; in pause, in suspense, trusting the universe to hold me safely as new possibilities arise.

As she paused in mid-air two hands came up to meet hers. The acrobat grasped her wrists; as she too took a firm grip they coursed their way down acting on their intentions and rose high together and into that place of exhilaration and anticipation; then back, then forth, then back, then forth, rising higher and higher each time, and each time pausing at the apex, and pausing within the liminal space, where all things are possible.