The Future of Religion In Our Changing World 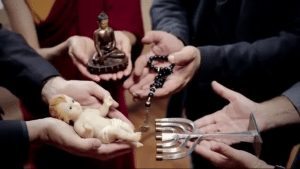 The intent of this page is not to be controversial or to make any claims as to what is fundamentally right or wrong. Rather, it is to merely raise the question about the future of religion in the context of the New Age movement beginning in the 1970’s and the rise of Spiritualism; the seeming move towards a One World Religion as exemplified by recent actions of Pope Francis; the leadership style of the Dalai Lama; the New Thought movement, and the idea of the rise (real or imagined) of a New World Order.

While quite heady to get one’s arms around, much less to comprehend, perhaps it is worth pausing to raise one’s own awareness and consider one’s belief system in the context of our changing world.

The Future of Religion: An Interview with Ninian Smart by Scott London

One of the most intriguing aspects the new religious scene in America is the pervasive mingling and mixing of different faiths and traditions. Never before in history have so many religious values and rituals coexisted within a single society. Much has been written about the cross-pollination of race, ethnicity and cultural values, but what happens when religions meet? Will the syncretism of the global village lead to some sort of universal religion, as some predict, or will it produce a vibrant mosaic of many different faiths? – Ninian Smart

One of the less controversial of countless videos on the topic of the One World Religion and New World Order.

H.H. DALAI LAMA • Is there only one true religion?

Pope Francis has captivated the world with his kindness and progressive ideals. What specific actions has he taken that make him so popular?

Pope Francis – joins the 500th anniversary of the Lutheran church, and signs a joint declaration stating that the two traditions have more uniting them than dividing them.

The religious profile of the world is rapidly changing, driven primarily by differences in fertility rates and the size of youth populations among the world’s major religions, as well as by people switching faiths. Over the next four decades, Christians will remain the largest religious group, but Islam will grow faster than any other major religion. If current trends continue, by 2050 … 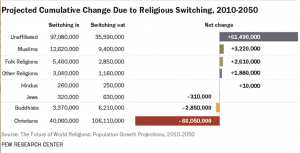