The Baton and the Marathon

In high school track I was not much of a sprinter so I never learned just how to pass the baton, and on the rare occasion when called upon in practice to fill in and run with the relay team, I sometimes fumbled or dropped it. What I did learn was that I had endurance. I would run the half-mile, the mile, and later in life, the marathon. (I ran one in a row.)

In the early spring of 1999, the day before the Motorola Austin marathon, I drove the route and came up with twenty-seven words that became mantras dedicated to each of the 26.2-miles, each representing something or someone special: faith, hope, love, courage, Mother, Father, vulnerability, compassion, etc. 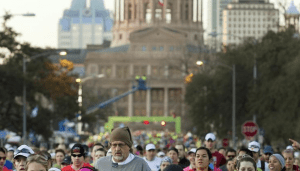 The following morning the energy in the air was palpable as the starting horn blasted and we all took off; a sea of bobbing heads, and the arms, torsos and legs, and the feeling of being one with the people around me. I clocked just under 9-minutes the first mile; a respectable pace, but too fast for me for the distance. With each mile marker there were people cheering, live music playing, and hands reaching out with cups of water; all a reminder to slow down and pull the next word from my small fanny pack and begin the next mantra.

Eventually, behind the thinning tail of the pack I crossed the finish line on Auditorium Shores. A finisher’s metal was handed to me to place around my own neck, as well as a thermal blanket to wrap around myself like a centurion’s cape.

Now, almost every day when I drive downtown across some portion of the route I reflect on the word for that mile of the race and, for a moment, I feel it all again; the excitement, the heart pounding, the pain and fatigue, the humbling pride; another memory turned metaphor to reflect upon.

Today, it’s hard to believe that after almost nine years, almost 450 weekly gatherings, and over 20,000 collective man-hours invested in the overarching topics of male spirituality and compassion, it’s time to pass the baton.

Nothing is going away, the circle, the network, the connections, holding space for one another, it will all continue. But, for me the change is a bit scary to say the least. At the same time, I am excited to share that a seasoned team of guys is picking up the baton and bringing fresh energy to our Monday contemplative circle. I will still be involved, participating and facilitating from time to time, but this will enable me to increase my focus in two key areas:

First, my podcast, In Search of the New Compassionate Male. It is resonating with more and more thought leaders around the world. They are surfacing to join the search and I want to continue to provide a platform for them to be heard.

Second, I will be investing more time into my Life Skills Coaching which I am offering to both men and women. This, to help fund the Search.

I believe that during this incredible time if change, the New Compassionate Male is emerging as the new archetype. I have witnessed it within our circle and within myself, and it is being confirmed with each podcast episode.

I am truly grateful and blessed to be on the path with so many heart-centered and compassionate men and women, and I am looking forward to our collective, and unfolding future; somewhat of a marathon ahead perhaps, but one filled with excitement, if we choose.